Dynamics NAV with Amyuni on a 64bit server

They were using Amyuni v3 for pdf creation. The client is not utilising the Role Tailored Client so could not use the built in SAVETOPDF function.

When trying to launch the process that creates and emails a pdf we received this error message. 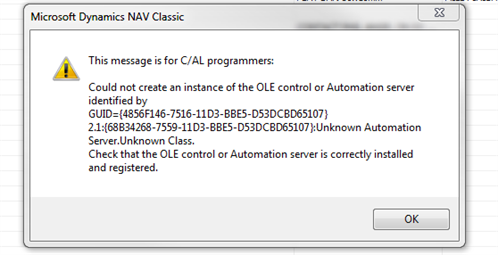 Not really helpful but we knew it was related to Amyuni.

Here is the fix:

1. Install Version 3.0 of the PDF Convert (Note: it asks if you want to check for and install a new version, but you should say no to this prompt)

2. Make sure the port is a COM and not Serial (as per notes in license file anyway)

4. Open NAV Development environment. Find the variable of type Amyuni COM in the relevant code, then save and re-compile the object

5. Update the permission on the registry key HKEY_LOCAL_MACHINE\SYSTEM\CurrentControlSet\Hardware Profiles\0001\Software\Navision PDF Converter to allow all users full control. In Server 2008 and later it didn’t allow full control but in 2003 it did.

6. (Optional) Celebrate with a beer.